Some Notions about the Island of Ceylon... by Eudelin de Jonville 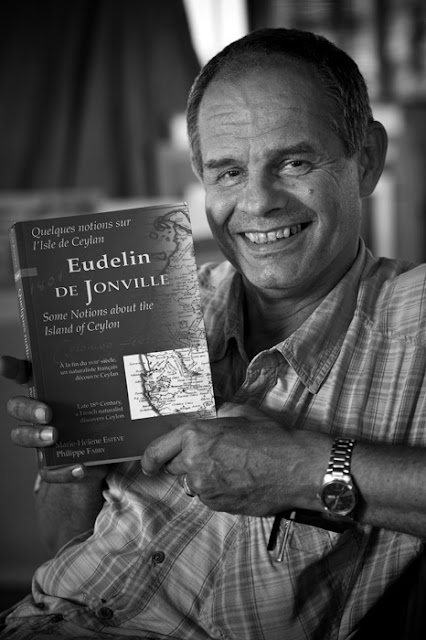 A picture of Philippe Fabry, author, illustrator, photographer, cartographer and translator. I attach his notes on the book he has just published. Distributed by Perera Hussein Publishing House and available at the Barefoot Bookshop.

Very few first hand accounts have been written on Ceylon during the early British period (and even before at the notable exception of Robert Knox account) and definitively not by a knowledgeable and kind scholar like Jonville.
Most of the accounts we have come from soldiers, priests, hunters, etc.
This makes a big difference as you will see when you will read this book : Jonville studies methodically and impartially and don't make judgement. He is a very open and curious mind and studies all fields possible as he is familiar to many : geology, astronomy, flora, fauna, mineralogy, etc.

He is an exceptional brilliant universal scholar.

He is also gifted with languages and speaks fluently many beside English and French : Italian, Portuguese, Greek, Turkish, etc.

There are also several drawings and sketches included in the manuscript and almost 200 watercoloured plates are annexed to it. We have reproduced some of them in black and white in the text and in colour in at the centre of the book.