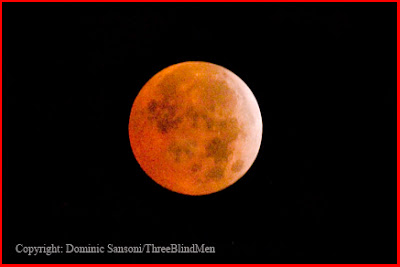 Taken in the early hours of Sunday morning. The colour has been very slightly saturated. Thanks to Seb for use of his monster lens. (Please note that changes have been made to features on moon surface - anyone copying this picture has a manipulated image).

Posted by Dominic Sansoni at 10:22 am

great shot... that musta been a big lens! I spent all night pointin at the moon with a puny 300mm and it was so small! but what a stunning sight it was! :)

Thank you. A friend lent me his 600mm f4 Nikkor and a very heavy tripod to go with it. Picture taken on 'high speed crop' (ie. part of full frame), on a D2X. I think the lens equivalent for 35mm film is 1200mm. It's the first time I have ever used such a long lens.

I was standing outside a pub in London with a group of people watching this too. Quite spectacular to see