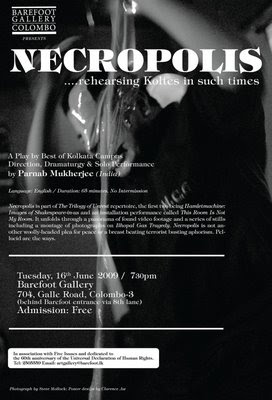 About the Director: Parnab Mukherjee

An independent media analyst and a performance consultant by profession, Mr. Parnab Mukherjee is one of the leading alternative theatre directors’ of the country. He divides his time between Kolkata, Imphal and the Darjeeling hills. Currently, a consultant with a publication initiative, he has earlier worked for a sports fortnightly, an English daily and a Bengali daily. He is an acclaimed authority on Badal Sircar’s theatre, Shakespeare-in-education and specialises in theatre-for-conflict-resolution and theatre-of-the-campus.

He is considered as a leading light in alternative theatre in the country having directed more than 50 productions of performance texts including three international collaborations. He has also performed 14 full length solos which include an acclaimed series of plays on trafficking, HIV and segregation called the River series, Living Text series and Foothills to Hills, a series of plays with Darjeeling as the living inspiration.
Parnab has created a personal idiom of using spaces for theatre exploration. He has extensively worked on a range of human rights issues which include specific theatre projects on anti-uranium project struggles in Jadugoda and Turamdihi, Save Tenzin campaign, rehabilitation after industrial shutdowns, shelter issue of the de-notified tribes, a widely acclaimed cycle of 12 plays against Gujarat genocide, and a range of issues on north-east with special reference to Armed Forces Special Powers Act, 1958.
Four of his major workshop modules: Freedomspeak, The Otherness of the Body, Conflict as a Text and The Elastic Body have been conducted with major theatre groups and campuses all over the country. He has written five books on theatre and his production of Tagore’s Muktadhara in Darjeeling and Sikkim is an important landmark to raise voice on citizens affected by projects in Teesta.

Posted by Dominic Sansoni at 1:09 pm