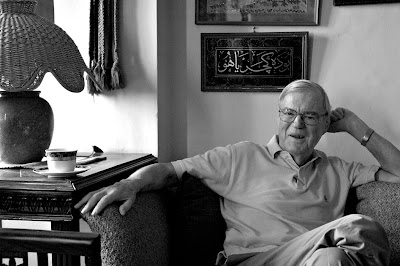 I had the good fortune to know Jim Spain when he lived in Colombo. He wrote one of my favourite books, In Those Days - a charming account of a Diplomats life. This photograph was taken in 2004. We send our love to his family in the States. The obituary below was provided by his family.

Ambassador Spain was born in 1926 in Chicago, Illinois, where he attended St Brendan's Parochial School and Quigley Seminary where his classmates included priest/author Andrew Greeley and “Vatican Banker” Paul Marcinkus. He received a Masters Degree from the University of Chicago and a PhD from Columbia University.

Ambassador Spain served in World War II, for a time serving on General Douglas MacArthur's staff as a photographer in occupied Japan. He entered the Foreign Service in 1951, and spent the entirety of his career in government service. His assignments took him to Pakistan, Turkey, Tanzania, the UN, and Sri Lanka.

His first post was as Vice Consul in Karachi in 1951. Following that he returned the U.S. where he lived, mostly in Washington, DC, until 1969. He was appointed as Charge d'Affaires to Pakistan in 1969, Consul General in Istanbul from 1970-1972, Deputy Chief of Mission in Ankara (1972-1974), Ambassador to Tanzania (1975 – 1979) and Deputy Ambassador to the United Nations under Andrew Young briefly in 1979, Ambassador to Turkey from 1980 – 1981, and finally as Ambassador to Sri Lanka from 1985 - 1988. He retired a Career Minister in the Foreign Service and remained in Sri Lanka until 2006, when he returned to the United States. He has been living in Wilmington since then.

He was the author of numerous books, including In Those Days, American Diplomacy in Turkey, The Way of the Pathans, Pathans of the Latter Day, and a series of novels featuring Dodo Dillon. He contributed articles on foreign affairs to a variety of publications.

Ambassador Spain lived a distinguished life of service to his country and dedication to his friends and family. He was a remarkably able diplomat who drew on his own odyssey from an impoverished youth on the South Side of Chicago – the son of a streetcar conductor and a seamstress who were Irish immigrants – to attending receptions with Presidents and Prime Ministers to inspire those around him to seek the best for themselves and their country. He met adversity with strength, rudeness with grace, and challenges with enthusiasm. He played pivotal roles in maintaining and strengthening the United States alliance with Turkey, in bringing about a peaceful transition to majority rule in Zimbabwe, and strengthening the United States' relations with all the countries of the subcontinent. He was most proud not of the headlines that he had a part in, but of the headlines that never had to be written, thanks to his work defusing tensions between nations.

One of his earliest memories of Chicago was being taken by his father to watch Al Capone walk through City Hall. His glimpse of the legendary gangster impressed many, among them Jawarlahal Nehru, the first prime minister of India, who once held up a reception line just to hear about it.

He was very pleased to have outlived Sen. Jesse Helms of North Carolina, but sorely disappointed not to have lived to see the next Democrat in the White House.

He was preceded in death by his beloved wife Edith and daughter Sikandra. He is survived by his sons, Patrick of Evanston, IL, William of Chicago, and Stephen of Wilmington, NC and his grandchildren, Jeanne, James, Aidan, Katherine, and Rachel.

A funeral service will be held in Washington D.C. at St. Thomas the Apostle Catholic Church at 10:00 AM on Saturday, January 5th. Burial will follow at Rock Creek Cemetery. The family will receive friends at 1:00 PM, at the Cosmos Club, 2121 Massachusetts Ave NW.

Posted by Dominic Sansoni at 10:10 am